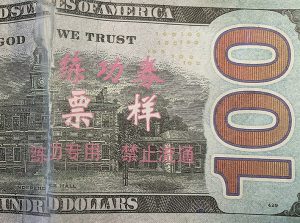 At first glance the $100 bill left in an honor box at a fruit stand west of Tabor City looked legit.

But when Robert Worley examined the bill, apparently left by someone who took four or five watermelons from his stand at 11516 Swamp Fox Hwy West, it was quickly clear the cash was counterfeit, a news release from Columbus Count Sheriff Jody Greene said.

Deputies responded to Worley’s call on July 27, and found the bogus bill to be prop money, often used in “movies, music videos and in other entertainment industries,” the news release said. “It can be easily purchased online.”

This particular cash has foreign writing stamped on it. Sheriff Greene said the public needs to know how to spot this kind of counterfeit money.

“It looks very similar to US currency, except for a slight color variation, texture variation, and the foreign writing,” the news release said. “Please be vigilant when making cash transactions to ensure that the currency you and the other party exchange is not counterfeit.”

Anyone with information on who might have passed this prop money is asked to contact Columbus County Sheriff’s Office at 910-642-6551.