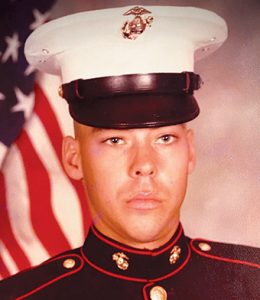 George Christopher “Chris” Jackson entered his heavenly, eternal home on Wednesday, August 18, after a sudden illness. He was 59.

He and his wife, Fran Baxley, resided in Mullins, where he grew up. Chris had a deep love and pride for his community, as was evident by his service and love, especially to his Mullins First Baptist Church family.

Chris served his country and was a proud United States Marine, ret. Chris was also retired from the South Carolina Highway Department. Chris loved God, his country, and his family.

Chris is survived by his wife Fran, of the home; his Mother-in-Law, Lib Baxley; stepchildren Christina Payne and her husband, Brian of Murrells Inlet, and Brent Cook and his fiancé, Brittany of Mullins; but the greatest joy that ever came to Chris was through his grandchildren, Wells, Haven, and Anderson, his three best gifts of life.

Coming from a tightknit, large family, Chris is also survived by his siblings, Susan Cannon (Scotty), Karen Rogers (Ricky), Mike Jackson (Marcia), Richard Jackson, and Bobby Jackson (Kim); and many nieces, nephews, cousins, in-laws, extended family, and friends that will be forever changed by the mark he left on their lives.

Funeral services were planned for 3 p.m. Saturday, Aug. 21, in the sanctuary of Mullins First Baptist Church, with Rev. Robbie Baxley officiating. The service will be live streamed on the Cox-Collins Funeral Home Facebook page.

Visitation was planned for the hour preceding the service in the Fellowship Hall of Mullins First Baptist Church.

For the safety of family and others masks are suggested for all in attendance at the church.