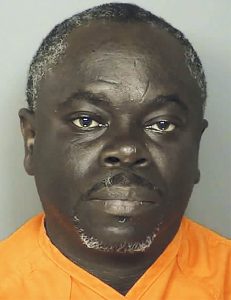 Thomas Tony Bradley/Note, an earlier photo posted here, was of a different person, an apparent technical issue on a website Tabor-Loris Tribune does not control. We are working to understand how it occurred, and apologize for the earlier post.

A police pursuit that began in Loris last Saturday and ended in Columbus County resulted in the arrest of man wanted by law enforcement on both sides of the state line.

Loris police began the pursuit there after an Horry County Police Department officer recognized the suspect in the white Explorer on Cox Road. LPD officers rushed to the area, encountered the Ford at an intersection, and quickly identified Bradley as the driver and lone occupant.

Bradley took notice of police, too, the LPD report said, and “looked right at” the reporting officer.

Bradley took off, police in pursuit at “speeds in excess of 85,” the report said. From Main Street the chase went north on US 701, and at some point officers were able to deploy stop sticks, which deflated both driver’s side tires of the Ford, the report said.

By then, there wasn’t much go left in the Ford, with tires coming off, the rear bumper and tail lights coming loose, the car “riding on rims,” the report said.

Deputies made the arrest, with Loris Police on hand to see their pursuit ended with their suspect in custody.

Bradley is facing charges in a string of Loris cases stretching back to May 23, and was out on bond following his May 29 arrest on several charges, jail records from J. Reuben Long Detention Center near Conway show.

Since then, Loris has obtained warrants for Bradley on a pair of shoplifting cases, and on a Sept. 3 incident with the suspect charged with hitting an officer with the fender and mirror of his vehicle and leading police on a pursuit that ended when eluded law enforcement on a dusty dirt road.

A related arrest was made Tuesday, when a woman identified in LPD and CCSO reports as Bradley’s wife, went to the sheriff’s office in Whiteville to inquire about her vehicle, the 2015 Ford Explorer police chased Saturday, and linked to other criminal cases against Bradley.

Crystal Lovette Smith, 36, of the same Main Street, Loris address as Bradley, was greeted with a warrant at the CCSO, charged with larceny in an Aug. 9 shoplifting at the Dollar General on Mollie Road in the Williams Township Community. Smith is accused of taking a wallet, underwear, socks, deodorant and more from the store.

More on this story can be found in today’s Tabor-Loris Tribune in print and online.