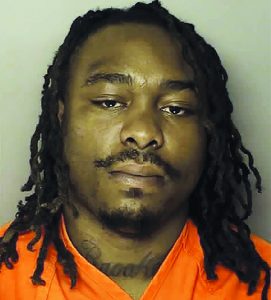 Convicted of voluntary manslaughter in a 2018 Loris area slaying this week, Quotase Jerome Jenrette of Clarendon has been handed a 25 year prison sentence.

Jenrette, 24, was convicted in the January, 2018 killing of Kendall Jamar Ray, 20, outside of his home on Bart’s Road near Loris, Fifteenth Circuit Solicitor Jimmy Richardson announced Wednesday.

Known by his loved ones as “Boot,” Ray was described in the prosecutor’s news release as “a father of three children, a big brother to his siblings, and a son.”

That news release said Ray’s “younger brother and girlfriend held him in their arms as he died after Jenrette shot him one time in the head.” However, an Horry County Police Department report following the shooting said Ray died a day later at Grand Strand Regional Medical Center in Myrtle Beach.

Circuit Court Judge Michael Nettles handed down the sentence, and said Jenrette must serve at least 85 percent of that time before becoming eligible for supervised release.

“Ray’s brother—who was 16 at the time—went on to graduate high school, go to college on a scholarship, work full time, and become a leader in his community, urging people to end gun violence and put the guns down,” the news release said.

Holford called the brother “an inspiration for all those who face extreme tragedies in their lives and become leaders pushing for positive change.”