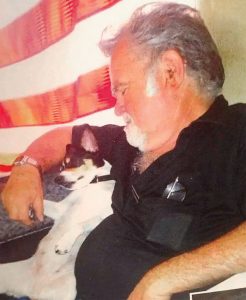 Another anniversary has passed, with no new answers for the family of Bill Strickland, shot in the back outside of the neighborhood bar he operated in western Horry County.

His sister, Ernestine McQueen of Fair Bluff, said the Sept. 21 anniversary of the shooting brought family trauma back, fresh, with the fervent host of an arrest, some day.

McQueen said the bullet that severed her brother’s spine killed him, but not quickly. Strickland died nearly a year later, on Aug. 9, 2015, in Carolina Hospital in Florence. He was 70.

“I’ve never stopped looking, stopped trying,” McQueen said on the anniversary of her brother’s shooting. “We have some ideas.”

It was not clear this week if the Horry County Police Department classified Strickland’s shooting as a homicide following his death. A request to the HCPD for an update on the status of this case, made Sept. 20, had not been answered on Sept. 28.

“Someone knows who did this,” McQueen said.

Strickland, a Fair Bluff native who had operated the neighborhood bar between Fair Bluff and Nichols for decades, told HCPD officers who responded to the shooting that he had been inside the closed establishment in the early morning when the power failed.

Strickland shot back, but it was not clear if he hit anyone, the report said.

Police were called at about 2:45 a.m. When they arrived they found Strickland conscious and in the care of Horry Fire Rescue Paramedics, the report said.

McQueen said her brother cashed a check “for a person” on the afternoon before he was shot, and that the names of “multiple suspects” have come up in her conversations with law enforcement on both sides of the state line.

Suspects, but not enough evidence for an arrest.

McQueen said she’s had very little contact with Horry County police in the seven years since her brother was shot, six years since he died.

With no solid leads, she said an HCPD detective have not given her much hope for a resolution of the case.