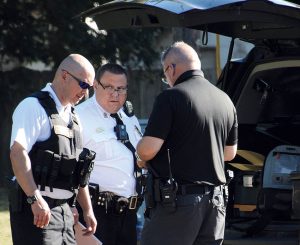 Details of a weekend shooting on Lewis Street that wounded three men are emerging this week as the Tabor City Police Department continues its investigation.

Two of the three were flown by AirLink helicopter from near the scene to a Myrtle Beach hospital.

All three men are expected to survive, Maj. Russell Conway of the Tabor City Police Department said this week.

Victims were identified as:

Four vehicles were also damaged in the gunfire at the former Jerry’s Garage on Lewis Street, a report by Officer Clay Hagood said. Windshield or window damage was seen on some. Damaged vehicles, the report said, included a 2004 GMC Yukon, a 1996 Honda Accord, a 1995 Freightliner truck, and a 2013 Chevrolet.

Officer Hagood was first to arrive on the shooting scene, finding Smith sitting in a chair, Scott laying at his feet, with witnesses “yelling they went down the road towards Green Sea,” his report said.

Police converged quickly and heavily on the scene in front of the Lewis Street business near 2nd Street. Maj. Conway said at least one of the men suffered multiple gunshot wounds involving the torso and legs.

Both men appeared to be conscious and were sitting upright as they were moved from Tabor City Emergency Services ambulances to AirLink helicopters that landed side-by-side in a field across West 4th Street from the Tabor City Fire Department, just two blocks from the shooting.

Both were flown to Grand Strand Regional Medical Center in Myrtle Beach, where they remained in stable condition this week.

Police knew early that there might be more than two victims, but not how many, and not how badly hurt, Conway said.

A call from Columbus Regional Healthcare in Whiteville informed investigators of the third victim, Stephens, who had arrived there with bullet wounds to the legs, Conway said.

Stephens appeared to be the least seriously hurt of the three, and has been released from the hospital, Conway said.

Stephens also proved to be the answer to a bloody mystery three blocks away, a trail left on the sidewalk on the south side of West 5th Street, about midway down the block.

This week investigators determined that Stephens had run from the shooting, making his way to West 5th Street, bleeding heavily, and that someone picked him up there and took him to the hospital in Whiteville.

All three victims, and witnesses at the shooting scene, have been interviewed, none were able to identify who fired multiple rounds from a dark Dodge Ram pick-up truck that sprayed the area and wounded at least three.

Multiple shell casings were located on the roadway. Conway said evidence indicates that all of the gunfire came from the truck, directed towards the building and those around it. There were no shell casings or evidence to show there was any return fire, Conway said.

“They say they didn’t see who shot them,” Conway said of the victims. “They say their backs were turned.”

That truck, however, was apparently located later Saturday on Shelley Lane in Western Horry County.

Armed with a search warrant, Capt. Christopher Hilburn and Maj. Conway went to the HCPD impound in Conway on Monday. Shell casings “consistent with those we found on the scene” were found inside the truck, and one unfired round was found in the truck bed, Conway and Hilburn said.

Chief Dowless said Tuesday the investigation is broad, and that the TCPD is coordinating with the Horry County Police Department and the Columbus County Sheriff’s Office.

Look for more on this story, and the week’s news, in today’s Tabor-Loris Tribune in print and online.