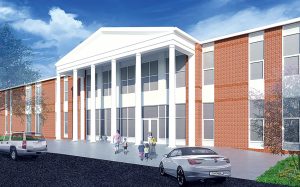 A drawing of the planned new Tabor City School

Commissioners met in a rare emergency session to give time for county and Columbus County Schools leaders to petition the USDA to increase the loan before a 60-day freeze on bid prices expires.

“It had to be done right away,” County Manager Edie Madden told the board.

Bids opened by the Board of Education on Tuesday came in well ahead of the $22,878,203 available for the project, the apparent low bid from Monteith Construction at $25,177,000.

Construction costs from residential to commercial have been rising sharply across the country, in part due to supply chain issues stemming from the pandemic, Supt. Dr. Deanne Meadows told commissioners, and impacted costs at the nearly identical West Columbus Elementary School, already under construction.

School leaders have already notified those at the USDA of the plan to expand the already approved loan amount, and were told the process will take from 45 to 60 days, Meadows said.

That, Madden says, has the county “pushing the edges of the time frame.”

Associate Supt. Dr. Jonathan Williams said the USDA will give priority to the request to modify the already approved loan over a new loan application.

Both Meadows and Williams said it’s unlikely that all of the additional $3.4 million will be used for construction, but that a buffer is wise.

“We don’t want to have to go back and ask for more,” Meadows said.

Increasing the loan will add no more than $200,000 per year to the county’s loan payments, probably less, county Finance Director Hugh Leatherman told the board.

Meadows said she believes USDA approval will come in time to make the agenda for the Jan. 4, 2022 meeting of the state’s Local Government Commission. Approval there is required for the project to go forward.