Threats on social media accounts were reported to the Columbus County Sheriff’s Office Friday morning, a news release from the agency said.

Columbus County Sheriff’s Office deputies and Troopers from the NC Highway Patrol responded, an addition to the typical presence of School Resource Officers on campus. That presence remained heavy at 10 a.m., with a steady flow of parents picking up children, and other students leaving in their own vehicles. One law enforcement officer estimated that more than half the students had already left, and noted that the football team, cheerleaders, and support staff would be leaving soon for an away state playoffs football game in Washington. 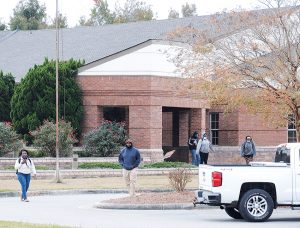 “We are taking these threats serious. As of this time, the schools are not on lock down. No other incidents have been reported from any of the schools.”

One parent said his child received the threat by text message before school Friday, and later called asking to be picked up.

“I don’t think anything is going to happen, but if something did happen and I didn’t come get her I couldn’t live with myself,” the parent said.

“Sheriff Greene would like to take this opportunity to remind parents of the importance of monitoring their children’s social media accounts,” the news release concluded. “There are apps available for download to assist parents with monitoring online activity and social media posts.”

Look for additional posts here as events warrant, and in the next Tabor-Loris Tribune in print and online.