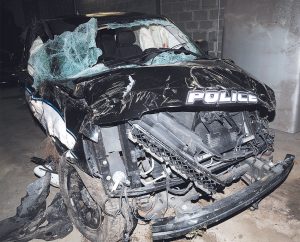 Officer Clay Hagood of the Tabor City Police Department suffered relatively minor injuries after his patrol cruiser overturned as he swerved to avoid a deer on the way to work Saturday, Chief Donald Dowless said.

Hagood, 42, was on Soles Road near New Britton Hwy south of Brunswick when he encountered a deer in the roadway in a curve, Dowless said.

It was about 5:30 a.m., the 2014 Chevrolet Tahoe overturned on the road shoulder and slid into some small trees, Dowless said. Hagood was taken to Columbus Regional Healthcare in Whiteville.

“He’s got some cuts and bruises,” Dowless said. “He’s going to be really sore.”

Like all full-time TCPD officers, Hagood is assigned a vehicle which he takes home when off-duty, Dowless said. It’s part of a policy designed to help retain officers and allow them to respond more quickly when called in during their scheduled time off, the chief said.

Hagood is a veteran police officer, formerly in Whiteville, and has been on the TCPD for about a year, Dowless said. A NC Highway Patrol investigation is pending, Dowless said.

Look for updates here, as events warrant, and in the next Tabor-Loris Tribune in print and online.