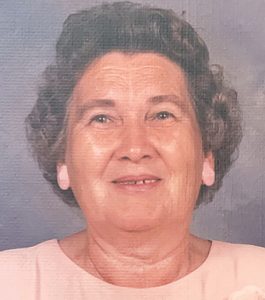 Lillian Helen Lemak Durst of Loris passed away on Saturday, Nov. 27, in Wilmington following an illness. She was 94.

Born July 19, 1927 in New Brunswick, New Jersey, she was the daughter of the late Anthony Lemak, Sr., and the late Veronica Bodnar Lemak.

Early in her life the family moved back to Romania. The hardships she endured and survived during World War II in Europe formed her character and was evident in the helpfulness to all those around her.

After the war the family moved back to New Jersey and ultimately moved to Loris in 1976. She was a true family lady who placed great value on spending time with her children, grandchildren, and extended family.

As a devout Catholic she regularly attended the Catholic Church of the Resurrection, where she was a founding member. She found great joy in tending her many flower gardens, potted plantings where she could put her true green thumb to use. She also shared her love of traditional Hungarian cuisine from her early years with her family and friends through her preparation and enjoyment of many dishes and desserts.

Mrs. Durst had an extremely close-knit group of friends with whom she shared many meals and quality time. She was a true friend who filled the lives of those around her with laughter. She will be tremendously missed by all who were blessed to have known her.

Visitation was planned from 4 to 6 p.m. Thursday, Dec. 2, at Hardwick Funeral Home with a Vigil Prayer Service at 4:30 p.m.

A Funeral Mass was planned for 3 p.m. Friday, Dec. 3, at Catholic Church of the Resurrection in Loris with Father Rick LaBrecque officiating, committal services following at Twin City Memorial Gardens.

Family requests that memorials be made in her honor to Catholic Church of the Resurrection, 204 Heritage Road, Loris, SC 29569.