“It was the space heater in the two girls’ bedroom,” Blackman said.

The older of the two girls had turned off that heater as the room crew hot, Blackman said, then turned it back on when the room got cold. Because she was on the top bunk, she felt the hear first, woke, and alerted everyone in the home, including her younger sister in the bunk below.

Fire had swept up the wall behind the heater, to the right of the bedroom door, and got into the ceiling where it spread rapidly, Blackman said.

“The girls had to go by the fire to get out,” Blackman said. “Their burns were on their right sides, where the fire was.”

“It was a nightmare call,” Fowler said.

Though the call was in the Fair Bluff Fire District, Tabor City firefighters were first on the scene. Gary Watts, who lives on CH Buffkin Avenue where the fire took place, followed quickly by Fowler, the TCFD chief said.

CH Buffkin Avenue is a narrow dirt lane off of Swamp Fox Hwy West, west of Tabor City, and the home that burned at the very end.

“That made it tough, then we had a 100 pound propane cylinder blowing off, fueling the fire, and several smaller LP tanks about to blow.”

Fire crews from Tabor City, Fair Bluff, and Cerro Gordo responded, Fowler said, a crew from the Whiteville Fire Department was on the way as the fire was brought under control, and that crew was cancelled nearly an hour after the first alarm. 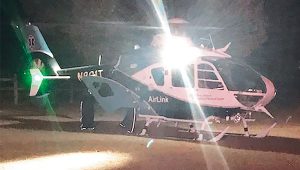 Two girls, ages 5 and 9, were among those with serious burn injuries, the oldest described as a hero for waking the extended family up and getting everyone out of the house, Beverly Elliott of Tabor City Emergency Services said.

“She smelled something and got back up and the house was on fire.”

“She woke everybody up,” Columbus County Fire Marshal Shannon Blackman said. “She was a hero.”

Blackman said the cause of the fire remained under investigation Monday morning.

An AirReach helicopter met a TCEmS ambulance at the McLeod Loris helipad flew a patient to the Medical University of South Carolina at Charleston, she said.

At least three patients were being transferred to the Joseph M. Still Burn Center at Doctors Hospital in Augusta, Georgia Monday morning, Blackman said, including the two girls, taken by ground ambulance.

David Vela, 48, a Lake Waccamaw Fire Department member, was flown from Grand Strand to the JMS Burn Center Monday morning, Blackman said. His injuries included airway burns, though he was able to talk with firefighters on the scene early Monday, the fire marshal said.

Another of the injured, a 31 year old man who was flown to New Hanover Regional, was likely to be transferred to the Burn Center at UNC Hospitals in Chapel Hill, Elliott said.

Annette Soles, the home owner, suffered minor burns but no severe injuries, Blackman said. She was evaluated at a hospital after going to check on family there.

(Some errors in relationships have been corrected as this story has been updated.)

Look for updates on this story here as events warrant, and in the next Tabor-Loris Tribune in print and online.