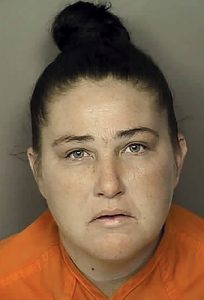 A 20-minute long police pursuit that began in a “high crime area” of Tabor City ended with stop sticks disabling the suspect’s pick-up truck and her capture during a foot chase, the Columbus County Sheriff’s Office reports.

Columbus County deputies obtained warrants charging Hernandez with fleeing to elude and assault with a deadly weapon on a law enforcement officer, accusing her of attempting “to strike an investigator’s vehicle” during the pursuit.

Sheriff’s Vice-Narcotics investigators “were conducting surveillance in high crime areas of Tabor City” when they “observed a red pickup truck leaving one of these areas,” the news release said.

Hernandez did not stop when investigators attempted to pull her over, triggering the pursuit that included her attempt to strike an investigator’s vehicle, the news release said.

As the pursuit crossed the state line, the Horry County Police Department assumed the lead position in the chase. Hernandez “wrecked into a ditch but was able to drive out and continued fleeing.”

A Loris Police officer was able to successfully deploy stop sticks, “flattening the vehicle’s tires,” the report said. Hernandez’ truck “wrecked into the median of US 701, just outside the Loris city limits,” the news release said. “Hernandez fled the vehicle on foot.  However, Horry County Deputies and Columbus County Investigators successfully apprehended her.”

Hernandez was found to have cocaine in her possession.

Sheriff Jody Greene expressed his appreciation to the responding agencies, and Horry County dispatch, for their assistance.

Look for updates here as events warrant, and additional details in the next Tabor-Loris Tribune in print and online.