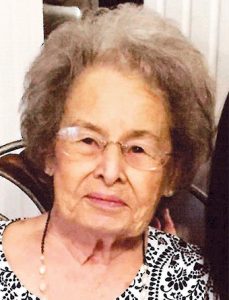 Maurice Watts of Tabor City widow of Ted Watts, passed away Thursday, Dec. 30, at Shoreland Health Care and Retirement Center in Whiteville. She was 95.

In her younger years, she worked as a telephone operator, but was known by most by her work at Dameron Drug Store.

She was preceded in death by her parents; her husband Ted; and a son, Ted “Chipper” Watts, Jr.

Family planned to receive friends during the hour preceding the service in the chapel, and at other times at her home.