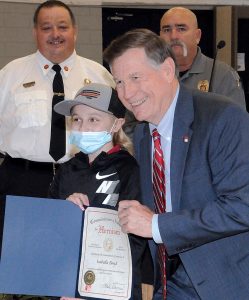 “I still have the dreams,” Theresa Boyd said Thursday of the Nov. 29, 2021 fire that consumed the family home west of Tabor City and burned most inside, including her 9-year-old daughter Isabella Boyd, who alerted the family to the blaze.

Isabella was the focus for some better memories made Thursday, as North Carolina Insurance Commissioner and State Fire Marshal honored the fourth grader at Tabor City Middle School the “Commissioner’s Award for Heroism” in a presentation before her classmates, school leaders and others, in the school gym.

“I told her that morning that she was a hero in my eyes,” Columbus County Fire Marshal Shannon Blackman said.

Isabella was not aware the award was coming, and huddled close to her mother as Blackman and Causey spoke of her courage in the early morning, waking to find fire racing up her bedroom wall, climbing down from the top bunk bed to awaken her sister, Ava, in the bottom bunk, and alerting the family of the disaster.