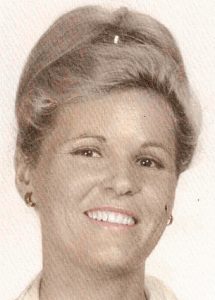 Hilda Faye Wright passed away Thursday, January 6, at her home in Indian Trail. She was 81.

Born in Columbus County on Oct. 30, 1940, she was a daughter of the late Carl and Bertha (Faircloth) Wright.

In addition to her parents, she was preceded in death by five brothers, Louie, Charles, Rutherford, Benjamin and Lynn Wright.

Family planned to receive friends during the hour preceding the service at the funeral home.