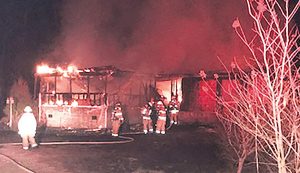 Fire that burned a Clarendon area man and injured his wife Wednesday night is under investigation by the Columbus County Fire Marshal’s Office.

Describing the mobile home as “pretty much destroyed,” Williams Township Fire Chief Mark Prince said the damage was making getting to the cause of the blaze difficult.

Deputy Fire Marshal Chase Lancaster said Thursday that the cause “remains under investigation.”

Fireworks were going off from inside the home when firefighters arrived, both Fowler and Prince said. Lockwood and his wife, Carolyn, were taken by Tabor City Emergency Services ambulance to Grand Strand Regional Medical Center in Myrtle Beach after weather issues prevented a helicopter from responding.

Robert Lockwood was transferred overnight to the burn center in Augusta, Georgia, Lancaster said. He did not know if Carolyn Lockwood, who was injured but not burned, was admitted to a hospital or released.