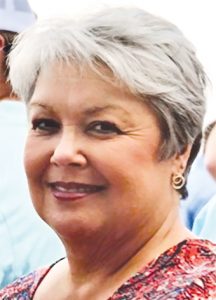 Vickie Lynn (Causey) Lupo of Green Sea, wife of Ray Lupo, passed away Thursday, Feb. 10, at McLeod Seacoast. She was 63.

She was born March 18, 1958 in Mullins, a daughter of Earlie and Teretha (Atkinson) Causey.

Early in her career, Vickie was a bookkeeper for Rabon Mobile Homes in Conway. She later worked for the North American Institute of Aviation in Conway, and finally as a bus driver for Horry County Schools. Vickie was a member of Green Sea Baptist Church.

She is survived by her husband, Ray Lupo of the home; a son, Justin (Teale) Lupo of Little River; a brother, James “Buddy” (Linda) Causey of Columbia; and her pets, Bella and Gracie.

Vickie was preceded in death by her parents; one brother, Earl “Cootie” Causey; and a sister, Jean Strickland.

Memorials may be made to Green Sea Baptist Church, 1241 Green Sea Road, Green Sea, SC 29545, or to any local animal rescue organization.