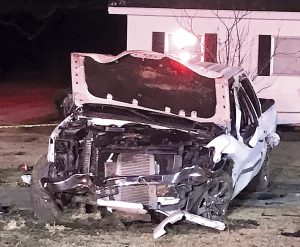 A GMC pick-up truck in the aftermath of a deadly crash near Tabor City Sunday. (Rocky McPherson photo)

Speed was a factor in a single-vehicle crash that claimed the life of a Tabor City man Sunday evening, First Sgt. Andrew Pate of the North Carolina Highway Patrol said.

Laramie Stanley, 24, died on the scene of the crash that was reported at 7:14 p.m. on Will Inman Road about a mile east of Tabor City, Pate said Monday.

Stanley was driving a 2006 GMC truck westbound on the two-lane highway when he crossed the centerline and ran partially off the left side of the roadway, crossed the highway again and partially leaving the pavement on the right side, then crossed the road again before striking a mailbox, then a ditch, and a utility pole, Pait said.

From there the truck continued through a field before striking another ditch before overturning.

Stanley was not wearing a seat belt, Pait said, adding that the report, still preliminary, listed only speed as a contributing factor to the crash.