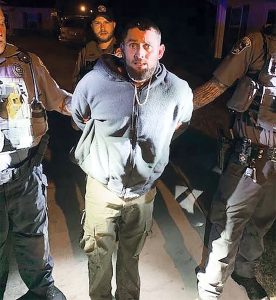 Indicted former Chadbourn Police Chief William Anthony Spivey will have his day in a Columbus County courtroom, likely many, following his arrest outside a Loris area apartment early Thursday, three days after he was reported missing on the Lumber River near Fair Bluff.

Spivey, 36, is awaiting trial on 110 felony charges related to his tenure at the Chadbourn Police Department chief from August 2018 through February 2020. He is accused of taking gun, cash and drugs from the CPD evidence room, forging prescriptions for opioids, and embezzling money given for a charity.

Horry County Police Department officers, acting on a tip, found Spivey at “his overnight location on Watson Heritage Road near Loris,” an HCPD news release said. “He briefly attempted to flee into some nearby woods before he was arrested.”

In custody just before 1 a.m. Thursday, Spivey was taken to the J. Reuben Long Detention Center near Conway.

Spivey was reported missing Monday morning after his boat and a borrowed pick-up truck were located near the Sandhills Hunting Club near Fair Bluff, a news release from Columbus County Sheriff Jody Greene said.

“Family members described the incident as a possible suicide,” the news release said. “Investigators quickly concluded that the evidence collected did not support a suicide scenario.”

“Meanwhile, Criminal Investigators were conducting a separate investigation. As investigators collected video from surveillance systems and conducted interviews, it became even more apparent that the scene on the river was staged.”

Warrants for failing to appear in court for a scheduled bond hearing were issued Wednesday, Spivey’s name entered in a national criminal database as “missing and wanted.”

As investigators collected evidence, a tip came in that Spivey was in South Carolina.

Once he is returned to Columbus County Spivey will face 40 new warrants for failing to appear in court, with bonds set at $25,000 each, a total of $1 million.

“This investigation is ongoing,” the news release said. “Additional charges and arrests are likely.”