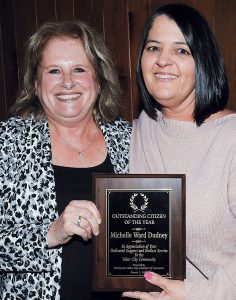 Going the extra mile might well have been the theme for the annual Greater Tabor City Chamber of Commerce banquet on Tuesday, with Michelle Dudney named Citizen of the year, Tony “Blake” Watts named volunteer of the year, and NC Yam Festival Manager Cynthia Nelson also honored, albeit in her absence.

Town Manager Al Leonard was the featured speaker for the banquet, held at The Ritz Plaza. His comments offered a history lesson on the Chamber, a substantial list of accomplishments, and a challenge to push forward into the future.

New officers and directors for 2022 were also installed during the banquet.

Citizen of the Year

Molina said Dudney was one of the first people she met upon moving to Tabor City several years ago.

“She was so warm and welcoming,” Molina said. “She is a born and raised Tabor City girl, who’s heart is as big as this town can hold. She works harder than most people and is an amazing mom and gigi to all her kids.

“If you are out on the streets in the middle of night before a festival or an event you will find her there making sure everything is right and people have everything they need.”

Dudney is equally active with the Chamber’s annual bass tournament, it’s annual fireworks celebration, and “does it all with the best smile,” Molina said. “She is caring to a fault and has become one of my best friends in Tabor City.” 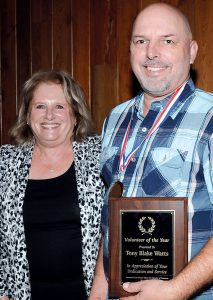 Born in Loris, Molina described Watts as someone with “a very familiar face around Tabor City. He’s a hard-working man.”

Retired from CenturyLink, Watts was quickly back at work for USIC while volunteering with various agencies, including the Columbus County Fair board, secretary of the Columbus County Wildlife Club, and Vice President of the Tabor City Recreation Commission.

“He has been an amazing foster parent and ended up adopting four wonderful children,” Molina said. “He has helped at all our recent Chamber events and Yam festival with that same enthusiasm he has for all the things he does.

“As you can tell he is a giving man of his time and I know in the last few years I have come to know him, he is fun-loving, caring, and the first one to raise his hand to help.”

Despite retiring from the Chamber as its Executive Vice President in 2020, Nelson returned in 2021, and returned to service at the North Carolina Yam Festival at Tabor City as its manager.

When Yam Festival directors decided to honor her, the Chamber banquet seemed a fitting time and place, though keeping the award secret was a challenge, Molina said.

Nelson was busy planning for the banquet throughout Thursday morning, but a family health issue forced her absence from the event. Molina said the honor given on behalf of the festival was well deserved.

“I think she knows everyone in town and everyone in town knows her for sure,” Molina said. Last year was Cynthia’s first year as the manager of the Yam Festival and she did the fundraising and task management to her usual high standards.

“She led the charge and did it in her usual professional way. So please join me in giving Cynthia a huge thank you from not just the Chamber but from the Yam Festival, too.

Chamber officers who are repeating those duties for 2022, and two new board members, were sworn by Clerk of Court Jess Hill as Richard Wright held for them a Bible on which he was sworn to the North Carolina House of Representatives in 1987. 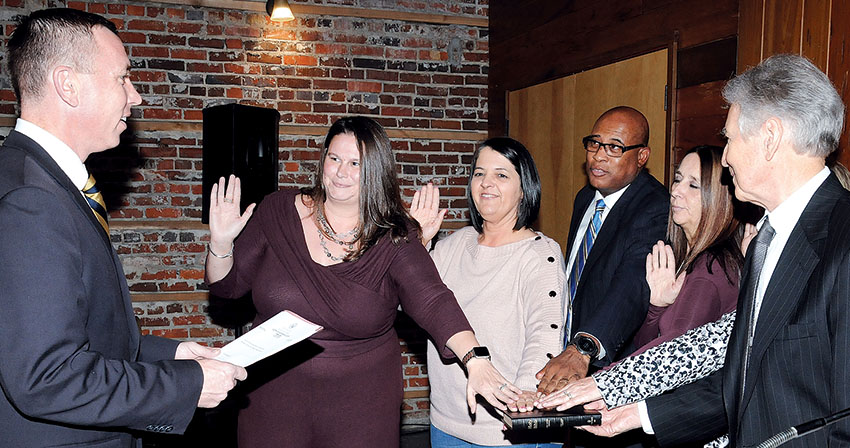