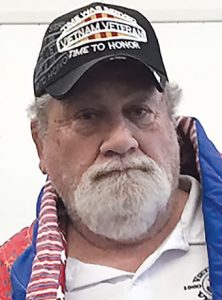 William “Bill” Raymond Spear, Jr. of Loris passed away on Tuesday, March 1, at McLeod Seacoast in Little River. He was 73.

Born Aug. 6, 1948 in Lansdale, Pennsylvania, he was the son of the late Arlene Spear Leatherman.

Mr. Spear served his country with honor and courage in the United States Army during the Vietnam War. After his service, he worked as a truck driver with Roth Industries until his retirement and was a member of V.FW. Post 10804 in Little River.

Survivors include his wife of 16 years, Nancy Spear; a son, Will Spear of Livingston, Montana; a daughter, Betty Lou Watson and husband Daniel of Loris; two grandchildren, Cory Gibson and Jamair Gibson; a nephew, James Gore and wife Kristen; a niece, Krystal Gore and husband Antonio; and a sister, Shirley Gore of Lansdale, Pennsylvania.

Visitation was planned for the hour preceding the service at the chapel.