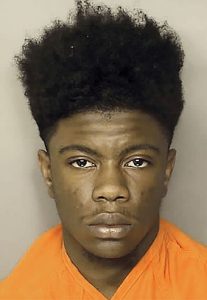 An Horry County Schools student has been charged criminally and faces sanctions from the district after a loaded AR15 assault style rifle was found in his car on the campus of the Academy for Technology & Academics (ATA) on Wednesday, the district announced on Friday.

Dontarrius Livingston, 18, of Longs was charged with carrying weapons on school property and marijuana possession, booked into the J. Reuben Long Detention Center near Conway at 4:18 p.m., jail records show.

An Horry County Police Department incident report said Livingston was cooperative with law enforcement and said items found in his car, the rifle, a box of ammunition and marijuana, were his.

Livingston was sitting in his car in the school parking lot when a staff member noticed him vaping, HCS spokesperson Lisa Bourcier said in the Friday news release. That staff member found the gun and other items when he searched the vehicle, police were “immediately contacted,” Bourcier said.

In addition to the criminal charges, Livingston “will face disciplinary actions to the fullest extent,” Bourcier said.

Parents and staff were notified of the incident Wednesday afternoon.

“In addition, this is a crucial time to remind students about the importance of not bringing weapons of any kind to school or on school property and to report anything they see that causes them to feel uneasy or that could be a safety concern,” Bourcier  said. “If they see something, they should say something to their parents or guardians, a staff member, or any other trusted adult.

“Keeping schools safe is a priority we all share, and we all have a role to play when it comes to maintaining a safe and orderly teaching and learning environment.”