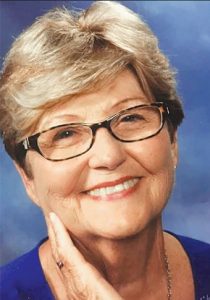 Born June 26, 1944 in Horry County, she was the daughter of the late Joseph Carl Prince and Cora Lee Harrelson Prince.

Lynda was known for her beautiful smile and her angelic singing. In 1954 in a cornfield right beside her little country home that sat on a hill on Wright Road in Tabor City, Lynda gave her heart to Jesus and she served him until she took her last breath.

Lynda was a member of Forest Lawn Baptist Church and a former member of New Home #1 Baptist Church where she loved singing in the choir. She also sang in the Quartet Spiritual Echos and Children of the King with her children.

In addition to her parents, she was preceded in death by her husbands, Wayne Shannon and William “Billy” Chipps, Jr; and one brother, William Carlyle Prince.

Visitation was planned from 6 to 8 p.m. Tuesday, March 8, in Inman Ward Funeral Home.