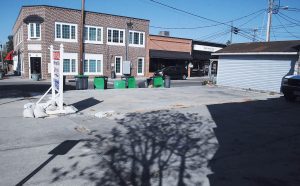 Land with potential for a new City Hall or other municipal uses has been offered to the City of Loris, with City Council taking a cautious approach.

Barbara Taylor owns the nearly 2,950 square foot lot at 4126 Railroad Avenue, just across the street from City Hall, and has a buyer for the property, Mayor Todd Harrelson told council during a called March 25 meeting .

A concrete slab remains where a business once stood, Harrelson said. Taylor has offered to sell the property to the city for $42,500, the mayor said. Harrelson said the property has been valued at $69,000, but county tax records show the value at $10,600 in 2019.

Taylor, Harrelson said, claimed the city offered to buy the property some years ago, during a previous administration. Taylor was not present for the meeting.

Council instructed city attorney Kenneth Moss to hire an appraiser before making an offer on the property, despite objections from Harrelson who asked for a quick vote.

“Go ahead and buy it,” Harrelson said. “It will help the looks of the city.”

“This is taxpayer’s money,” council member Carroll Padgett said. “We need to be frugal.”

“This will draw economic growth,” Vescovi said, adding that the property could become a small park with a mural and water fountain, something similar to Conway’s Main Street.

Harrelson said the land could be used to build a future city hall or annex, noting that there is no land available beside city hall; and that the lot could be used for additional downtown parking.