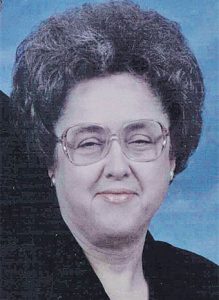 She was the daughter of the late James Carson Jernigan and Kathleen Ray Jernigan.

In addition to her parents, she was preceded in death by a brother, Kenneth Jernigan.

Family extends a special thanks to her caretaker, Barbara Dixon, and home nurse Ashley Simmons, and all of the nurses of the ICU of McLeod Loris hospital for all the special care and attention given during this time.