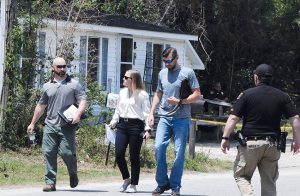 A “person of interest” has been identified in the shooting, and is being sought by law enforcement, Conway said.

Few other details were released Monday, Conway said to preserve the investigation.

A heavy law enforcement presence, including more than a half-dozen State Bureau of Investigation agents, followed a killing on Lewis Street Monday.

Police were called to the home at the corner of Lewis and King streets at about 10:30 a.m., and found a man who had apparently been shot and died, Maj. Russell Conway of the Tabor City Police Department said.

Because the state agency has more resources, their assistance was requested, Conway said. That request brought agents, a crime scene team, and two prosecutors from the District Attorney’s office for the 15th Prosecutorial District, including Assistant District Attorney Heath Nance.

Family members of the deceased were notified by early afternoon, Conway said, adding that more information on the incident would be released soon, though the investigation was in its early stages.

While police determined early that the victim had died, investigators did not re-enter the house for hours, choosing to obtain a search warrant first, Conway said. That search warrant, sought by the SBI, was coming from Wilmington.

Crime scene tape around the house, with additional layers to the south at NC 904, kept onlookers from getting too close, with some family members encouraged to stay cool waiting in vehicles rather than outdoors.

Look for more on this story here, as events warrant, and in the next Tabor-Loris Tribune in print and online.