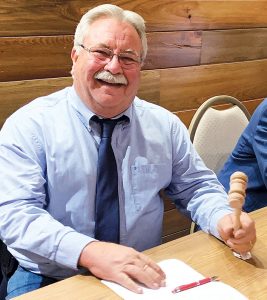 “He’s in a lot of pain,” Dawson said from the family owned Tabor City Auto Parts Tuesday. “They said a brain bleed was not as big of a concern today, but the broken ribs and a collapsed lung are.”

Royce Harper, 61, was on the trip with his son, Jason Harper; son-in-law, Buster Davis; and brother, Redell Harper. All four were on a piece of scenic highway near Murphy, Royce in his traditional position trailing the pack.

“They got to a point and stopped, turned around, and couldn’t find him,” Dawson said. “Jason went to look, then a cop car came by, and a rescue vehicle.”

In minutes Jason called the others. “He said ‘get up here, my Daddy’s wrecked,’” Dawson said.

Royce was riding his son’s motorcycle, one a bit heavier than his own, and was less familiar with it, Dawson said. “He probably didn’t have 100 miles on it.”

Royce later told family that he had noticed a “dip in the road,” and tried to avoid it. Instead, he hit it, sending the motorcycle to the road shoulder, back onto the pavement, “and it throwed him,” Dawson said.

Initially treated at a hospital in Murphy, Royce Harper was transferred by helicopter to a regional trauma center in Chattanooga, Tennessee. His wife, Lora, rushed to his side as quickly as possible and has been posting updates on Facebook since Sunday.

“Our God is so good,” Lora Harper posted Tuesday, thanking all for their support in so many ways, “but more importantly calling his name out in your prayers.”

See more of this story in today’s Tabor-Loris Tribune in print and online.