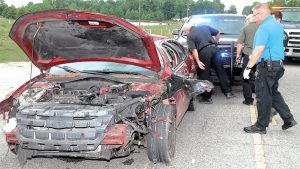 “He stopped because the vehicle wouldn’t run anymore,” Maj. Russell Conway of the Tabor City Police Department said Thursday. “He ran all of the anti-freeze out of the radiator.”

With the 2010 Ford Fusion stalled on US 701 south of FM Watts Road, at the Hardwick Farms entrance, police quickly had the driver in custody, Conway said. 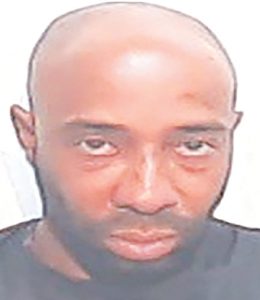 Kenyon Antonio Swinton, 43, of Maple Street in Loris, was charged with driving while impaired, fleeing to elude arrest, leaving the scene of an auto crash, resisting law enforcement, damage to property, and marijuana possession for a small amount of weed found in the car, Conway said.

Swinton was also held at the Columbus County Detention Center in Whiteville on an outstanding attempted murder warrant related to a 2018 Horry County case, Conway said. Bonds for Swinton totaled $513,500.

Police, fire and EMS units were dispatched to the auto crash call before 3 p.m. Wednesday, with 911 callers soon reporting that the car had left the town limits on U.S. 701, where the crash took place, and was heading towards Whiteville, Conway said.

The Fusion rolled twice after leaving the highway, struck a tree and the Tabor City Town Limits sign.

Police were quickly behind the Ford.

“He was all over the road, in the left lane, the right lane, a real danger to the motoring public,” Conway said.

Conway said the pursuit was surprising because of the damage to the car.

“I guess those Ford Fusions are tough,” Conway said. “It just kept going.”