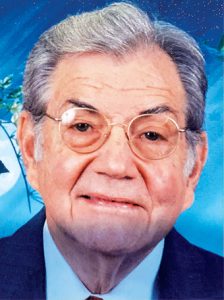 James Elbert Long of Tabor City passed away on June 26. He was 91.

He was born in Columbus County on Sept 30, 1930 to the late I.B. and Gertha Long, Sr. He was a graduate of Tabor City High School , a US Army Veteran and graduate of Langston Bible Institute.

He spent most of his life in Tabor City as a salesman with Merita Bread Company, Ammons Mercantile, Heilig Myers Furniture, and W.F. Cox.

Until the last 3 years he was an active member of Dogwood Hill Baptist Church, where he was a deacon, Sunday School teacher, served with the Brotherhood, sang in the Adult Choir and The Silvertones, as well as serving on several other committees.

He was a member of the Loris Chapter of the Gideons and served as Chaplain for the Tabor City VFW.

He loved fishing, gardening, helping his friends and neighbors on Britt Street, and playing with his grandchildren. When the grands came to visit, you could find him giving rides down the street in his wheelbarrow or sneaking off to get ice cream.

Family would like to give a very special thanks to The Retreat at Gaffney and Brookview Healthcare Center for helping take care of Daddy.