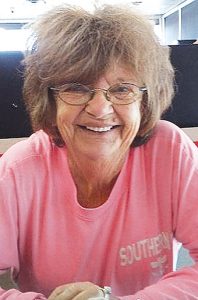 Carolyn Tate Fowler of Loris passed away Sunday, July 17. She was 69.

Mrs. Fowler was born in Mt. Airy, a daughter of the late Emmet Lee Tate and the late Lola Utt Tate. She had a great sense of humor, was a social butterfly, and could make friends with anyone.

Mrs. Fowler loved her grandchildren and enjoyed crafts. She was a member of Southeastern Church of God in Tabor City. Mrs. Fowler will be remembered as a devoted and faithful wife, mother, grandmother, great grandmother, and sister.

In addition to her parents, she was predeceased by three brothers, Roy Tate, Howard Tate, and an infant twin and one sister, Shirley Bolen.

A graveside service will be held at 11 a.m. Thursday, July 21, at Myrtle Green Cemetery in Tabor City with Mr. Chris Fowler officiating.