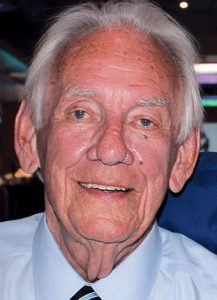 Sam T. Hooper passed away on Thursday, Aug. 11, peacefully at his home in Winter Garden, Florida. He was 90.

Born July 19, 1932, he was the son of the late George Richard Hooper and the late Pauline Elizabeth Power Hooper. He was born in Tallulah Falls, Georgia and grew up in Tampa and Honolulu. He graduated from Duke University in 1954 and was a Captain in the United States Air Force, proudly training pilots and flying B-25s. He was in sales during the rest of his career and conversed with all he encountered.

In addition to his parents, Mr. Hooper was predeceased by his wife of 54 years, Virginia Dyson Hooper, who died in 2013.

A celebration of his life is planned for 2 p.m. Saturday, Aug. 20, at Hardwick Funeral Home in Loris; where he will be reunited in eternity with Virginia.