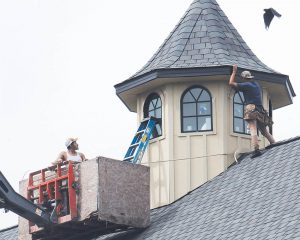 There should be quite the view of downtown Tabor City from the cupola atop the town’s community building, where construction continued Saturday under the watchful eyes of, well, you know. Supply chain issues have delayed the nearly $1.2 million project, now expected to be complete by Dec. 1. (Deuce Niven, TLT)

Efforts to secure more than $1.7 million in grant funding to address housing needs, the downtown business incubator project, and to study needed downtown drainage improvements were approved during a fast-paced meeting of the Tabor City Council on Tuesday.

A pair of budget amendments were also approved, funding repairs to the town’s Burns Street well and a vacation time by-back for some town employees, taking nearly $75,000 from cash reserves.

Council member Nelson Lee was not present for the meeting.

There was no public comment during the second of two public hearings required before council agreed to apply for up to $950,000 in federal Community Development Block Grant funds, money Town Manager Al Leonard last month said would pay to either renovate or replace four or five homes scattered anywhere in the town limits.

That grant application, to be prepared by The Adams Co., is due in Raleigh by Sept. 30.

An application to the NC Department of Commerce for a $750,000 “transformation grant” was also approved by council.

If approved, Leonard said that will fund:

That application is also due in Raleigh on Sept. 30.

Council agreed, again, to retain W.K. Dickson & Co. in Greenville, South Carolina to seek a study grant from the NC Division of Environmental Quality to address flooding in downtown from West 4th Street to Fair Bluff Road in the area of Stephens Building Supply.

Again, that application is due in Raleigh by the end of the month.

Council earlier this year agreed to allow full-time employees an opportunity to buy-back a portion of their accumulated vacation pay, an offer that seven employees have accepted, Leonard told council.

Paying for that time will cost $19,586, funds to be taken from the towns’ fund balance.

A well on Burns Street has been out of operation “for a couple of months,” Leonard told council. He stressed that the town’s other two wells, and its connection to Grand Strand Water & Sewer Authority, ensured that “at no time has the system been in peril.”

Leonard said Charles R. Underwood, Inc. of Sanford has been secured to repair the well at a cost of $55,000. Council approved the budget amendment, those funds also coming from the town’s fund balance.

For more on this story, and on the week’s news, see today’s Tabor-Loris Tribune in print and online.