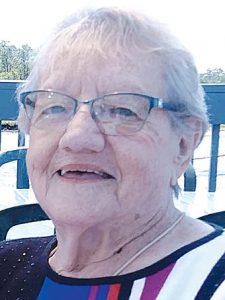 Pauline “Polly” Meckes Oehlert of Longs passed away peacefully on Tuesday, Sept. 6. She was 91.

Born May 20, 1931 in Jim Thorpe, Pennsylvania, she was the daughter of the late Harvey F. Meckes and the late Blanche D. Dotter Meckes.

Mrs. Oehlert enjoyed fellowship at Living Water Baptist Church. She worked as a seamstress with a children’s designer company, waitressed, and was a loving homemaker throughout her life.

Mrs. Oehlert was an active member of Pine Needle Divas and proudly held the title of “Queen Diva”. She was a past member of Corvair Club and Corvette Owners Club in Pottstown, Pennsylvania. She enjoyed gardening, walking, and all forms of needlework and was an avid counted cross stitcher to the end. She traveled extensively with her second husband, seeing most of the U.S. in their Airstream trailer.

In addition to spending most of her life in Royersford, Pennsylvania, she enjoyed homes in Ocean City, New Jersey, St. Petersburg, Florida, and most recently resided in Coastal South Carolina.