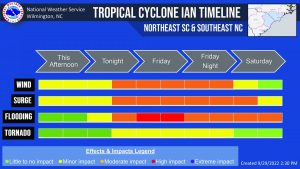 Government offices in the Tabor-Loris Community and beyond will be closed tomorrow, including those for Tabor City, Loris, Columbus County, and Horry County.

All courts in both Columbus and Horry will also be closed Friday, and most medical offices will be, too. Hospital emergency departments will remain open.

Columbus County Schools will be in “remote instruction” on Friday, the latest schedule change resulting from what was and is expected to become again Hurricane Ian.

After crossing Florida and emerging in the Atlantic, forecasts expect Ian to regain strength and reach hurricane status again later today, with landfall now expected somewhere near Charleston Friday morning, the storm’s center tracking near Columbia and Charlotte, with a wide swath of rain and wind along that path.

That, the National Weather Service says, may change somewhat.

Hurricane Ian, wreaking havoc in Florida Wednesday, seemed increasingly unlikely to have a major impact on the Tabor-Loris Community in the days ahead, though it was prompting some schedule changes.

National Weather Service forecasts Wednesday had pushed the cone of potential storm impacts related to Ian to the west, with the storm expected to crawl through Florida on Thursday, emerging in the Atlantic off of Florida before taking a north to northwesterly course over those warm waters and making a second landfall generally south of Charleston before storm remnants move generally towards the North Carolina mountains.

Some decisions on schools and other events were made Wednesday, others are expected Thursday, with modifications possible as the storm’s ultimate path requires.