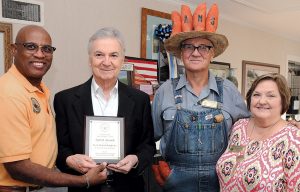 O. Richard Wright Jr., the only original North Carolina Yam Festival at Tabor City board member still serving, was recognized by the board as festival week heated up on Tuesday.

Wright was unable to attend a Worker’s Appreciation breakfast, where the plaque was to be presented, so festival President Joe Small, Manager Cynthia Nelson, and Mascot Curtis “Tiger Tater” Lovette paid a visit to the Wright, Worley, Pope, Ekster & Moss law offices on Lewis Street to make the presentation.

Clearly surprised, Wright said he was grateful to be presented the second Juanita Cook “Miss Puddin’ ‘N Pie’ Spirit Award, named in tribute to the late and original mascot of the festival after its revival in 1985.

“A True Yam City Treasure” is inscribed on the plaque.

Born in Horry County and reared in Vinegar Hill near Tabor City, Wright said he owes the town much, and has endeavored to give back for much of his adult life.

Wright is far from the only person receiving recognition as the festival week moves on.

Much is still to come this week, including Taste of Tabor tonight (Thursday) evening, judging for the annual art and photography contest on Friday, and the festival’s big day on Saturday highlighted by the parade, two stages of entertainment, competition including Tabor’s Got Talent and a sweet potato pie eating contest, and dozens of food and craft vendors.

Look for much more on what’s already behind us, and what’s ahead inside this week’s Tabor-Loris Tribune including a 24-page special festival section in print and online..