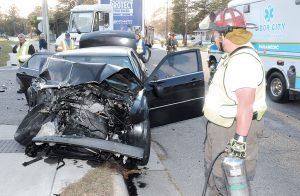 An unusual head-on crash involving a tractor-trailer truck and a passenger car near downtown Tabor City Tuesday afternoon resulted in a woman being flown by helicopter to a regional trauma center.

While the woman’s injuries were not minor, Lt. Gary Lewis of the Tabor City Police Department said they did not appear to be life threatening.

It appeared that the setting sun just before 4:20 p.m. blinded the woman, who was headed towards downtown on East 5th Street and attempting to veer left onto Orange Street, Lewis said. Her Chrysler 300 struck an Atlantic Packaging tractor-trailer truck head-on, the impact so severe that the front of the car was crushed and the battery, housed inside the trunk caught fire. 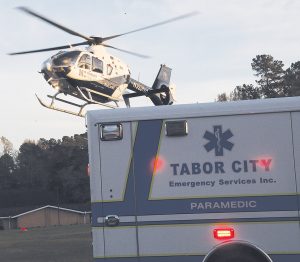 A Novant Health AirLink helicopter landed in an adjacent field, and took the woman to Grand Strand Regional Medical Center in Myrtle Beach.

Lewis said his investigation was ongoing.