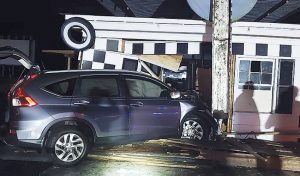 A re-design of the intersection at US 701 at NC 410 at East Tabor put a long pause in a series of auto crashes that involved a building there, until Thursday night.

Motorheads, as the building was most recently called, looked to be “totaled” after the 10 p.m. crash that involved two vehicles and sent two people to the hospital. Tabor City Fire Chief Jeff Fowler said.

Damage to the building, a report by First Sgt. Jeffrey Grainger of the Tabor City Department said, totaled $225,000, with another $10,000 each to the 2013 Chrysler Town & Country mini-van that hit the building and the 2016 Honda, whose driver was charged in the crash. 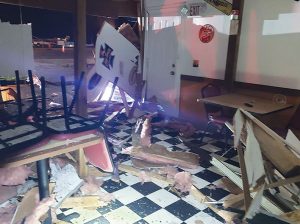 Karen Lynette Dismuke, 53, of Dapple Grey Lane in Charlotte was travelling south on NC 410 and told police she “swerved to miss an object in the roadway and lost control of the vehicle,” the report said, causing her Honda to hit the Chrysler driven by Stephanie Dianna Cartret, 42, of Anns Lane, Whiteville.

Dismuke was charged with failing to reduce speed to avoid a collision, the report said.

Dismuke had two passengers in the Honda, and two were taken by Tabor City Emergency Services ambulance to McLeod Loris hospital.