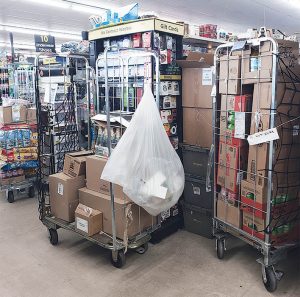 Dollar General closed the store voluntarily on Nov. 2 and 3 as a result of similar violations, Fowler said earlier this month. Aisles were cleared when the store re-opened on Nov. 4.

A return visit to the store Thursday resulted in the Fowler’s order closing the store to the public.

“Exit doors were blocked, and you couldn’t get down the isles for so much stuff in them,” Fowler said following the store closing earlier this month. Photos provided by Fowler Thursday told a similar story. A series of photos showed aisles completely blocked by carts filled with boxes of merchandise not yet put no store shelves.

Blackman, earlier this month, said he’s seen similar problems in other Dollar General stores in the county, and issued a $500 fine for one store recently

“They build those stores with not enough space in the stockroom, so it’s in the isles, and they don’t have enough employees to keep everything put up,” Blackman said.

Look for updates on this story as events warrant and in the next Tabor-Loris Tribune in print and online.