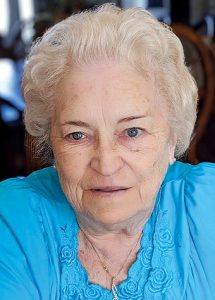 Born Oct. 12, 1937 in the Guideway community of Columbus County, she was the daughter of the late Elbert Gray Suggs and the late Ellen Long Suggs. Mrs. Hewett was a longtime member of Dulah Baptist Church and an owner of Hewett’s Heating and AC until her retirement.

The family would like to extend a heartfelt “Thank You” for the tremendous outpouring of love and support they have received during this difficult time. The compassionate care afforded their mother by Angela Fowler, Fannie Watts, and Fran Maher will never be forgotten, as well as the prompt and professional care the family received from the North Myrtle Beach Fire Department and North Myrtle Beach Rescue Squad.