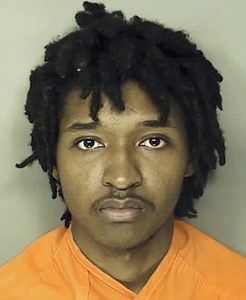 Xavier Antonio Rayquan Thomas is charged with murder in a warrant obtained by the Columbus County Sheriff’s Office in the Jan. 10 killing of Julian Juan Fipps.

CCSO spokesperson Michele Tatum provided that update in an e-mail response for clarification on the charges facing the Tabor City resident.

An arrest has been related to the shooting death of Julian Juan Fipps, a week after his body was found inside his overturned Jeep Wrangler near Nakina.

Exactly what Xavier Antonio Rayquan Thomas is charged with was not clear from a Columbus County Sheriff’s Office news release sent just before 5 p.m. Tuesday.

Thomas, 21, of Tabor City was arrested in Horry County on Monday and held at the J. Reuben Long Detention Center near Conway on a fugitive warrant.

Responding to a request for clarification on the charge a CCSO spokesperson said simply “It is a fugitive warrant.”

In the media release from Sheriff W.A. Rogers, the headline read “Arrest made in Fipps’ homicide,” but the document did not specify the charge facing Thomas, or say if there were other related charges.

Multiple calls of “shots fired” and an overturned black Jeep Wrangler on the shoulder of M M Ray Road, Clarendon, brought sheriff’s deputies and other responders to the area at about 8:45 p.m. on Jan. 9, the news release said.

Deputies found the Jeep overturned, and found Fipps dead inside. “Fipps had sustained fatal gunshot wounds,” the news release said. He was 31.

“Multiple shell casings were collected at the scene,” the news release said, as investigators began interviews and obtained search warrants for the Jeep “and related cellular devices.”

With the investigation ongoing, the sheriff’s office is asking anyone with related information to contact the Criminal Investigation Division at 910-640-6629.

Look for updates on this story here, as events warrant, and in Tabor-Loris Tribune in print and online.