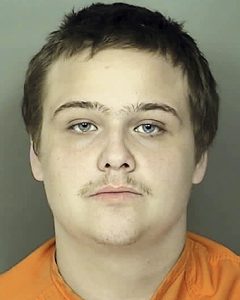 A Green Sea woman already in custody in a missing persons cased that resulted in the discovery of an assault and death has now been charged as an accessory in his murder.

The woman’s son was also in custody Thursday as the victim was formally identified.

Corey Adam Soles, 29, of Chadbourn, was formerly identified as the victim Thursday by Horry County Chief Deputy Coroner Tamara Willard. Willard said the delay in making public Soles’ name was necessary because at least one family member was difficult to locate.

Samantha Watts, 40, of Green Sea, was charged Thursday with accessory after the fact to felony murder, online records at the J. Reuben Long Detention Center near Conway showed.

Watts had been granted an $85,000 bond during a hearing late Wednesday no previous charges of obstructing justice and a series of drug related offenses. She remained in custody without bond on the murder related charge Thursday.

Watts son, Jonathan Edward Watts, 18, of Myrtle Beach, was arrested Wednesday, charged with assault and battery by mom, jail records show. An HCPD spokesperson confirmed the arrest was related to the missing persons and death investigation, but provided no other details.

Soles body was found near the Galivants Ferry area on Jan. 16, six days after a missing person’s report was filed with the Horry County Police Department.

Samantha Watts and three juveniles were taken into custody in connection to the finding of Soles body, the HCPD reported on Jan. 17.

Those juveniles were placed in the custody of the S.C. Department of Juvenile Justice in Columbia.

Jonathan Watts, on a Facebook page that shows no activity since last May, wrote that he attended Green Sea Floyds High and was a Loris area resident at that time.