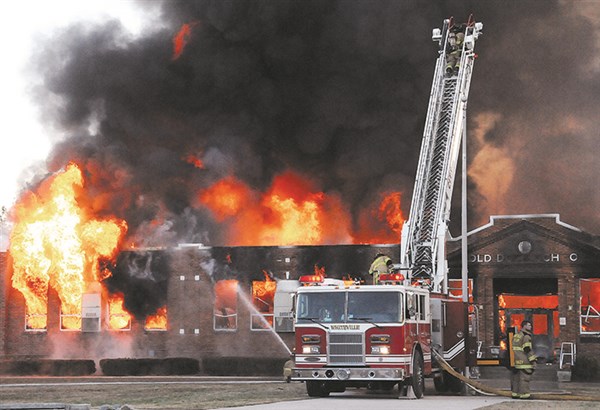 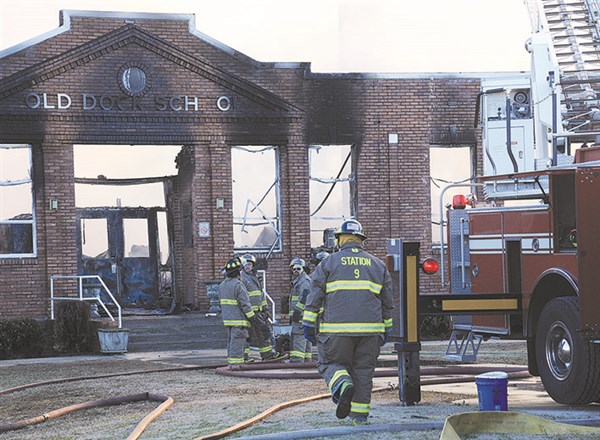 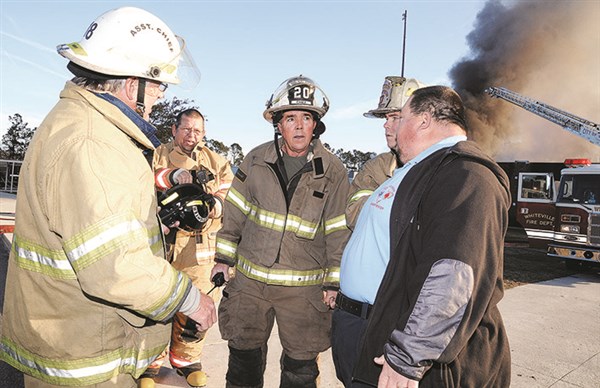 UPDATE: ELECTRICAL CAUSE CAN NOT BE RULED OUT: Fire at Old Dock Elementary School apparently began above the ceiling to the south of the school office, and investigators can not rule out an electrical problem as its cause, Columbus County Deputy Fire Marshal Shannon Blackmon said.
Investigators completed their work on the scene Wednesday afternoon, Blackmon said. Investigators from the Columbus, Brunswick and Pender county fire marshals offices and agents from the State Bureau of Investigation and the Federal Bureau of Alcohol, Tobacco and Firearms took part in the probe.

UPDATE: School will be in session at Old Dock Elementary School on Thursday, Columbus County Schools spokesman Kelly Jones said, with the three classes displaced by Wednesday’s fire to set up in the school gym.
School starts at 10 a.m., throughout the county school district Thursday, due to forecast frigid overnight temperatures.

UPDATE: School officials now say school may be in session at Old Dock Elementary School as early as Thursday, if temporary classroom space can be established in the school gym. That decision should come later today, and will be posted here as soon as we know.
All of the Columbus County Schools are scheduled to open at 10 a.m. tomorrow because of frigid temperatures forecast for overnight.

Fire gutted the main building at Old Dock Elementary School this morning, a fast-moving blaze that engulfed the 75-year-old structure as firefighters raced to the scene and school busses were turned away.
Some staff was on campus when fire alarms began sounding about 6:30 a.m., Columbus County Superintendent Alan Faulk said. Alarm company monitors and staff called in the fire quickly, and Old Dock Cypress Creek Fire Chief Edwin Ezzell said smoke was visible from several miles away as he responded.
Classes at the school were immediately cancelled for the day, Faulk said, with any decision on when they will resume dependent on the investigation that will follow the fire.
Local, state and federal fire investigators will be involved in the probe, Columbus County Emergency Services Director Kay Worley said.
Investigators from Pender and Brunswick counties were on scene within hours, asked to assist, in part, because Columbus County is currently without a Fire Marshal, though several deputy marhsals are on staff, Worley said.
“It’s going to take at least five or six investigators, just for the size of the building,” Worley said.
Built about 1938, the main structure is part of several buildings on campus and housed only three classrooms, Principal Ronna Gore said. Administrative offices, the library, and auditorium were also consumed by the fire.
As firefighters were bringing the fire under control, some two-dozen teachers and others stood in a prayer circle near NC 130, the busy highway shut down for a time during the firefighting effort.
For Gore, the blaze brought back tough memories. She was a teacher at Williams Township School when its main two-story building, constructed about the same time as the Old Dock structure, burned in an early morning blaze on Jan. 6, 2004, that took 1.2 million gallons of water to extinguish.
“It’s just so sad,” Gore said. “But I’m so impressed, so many people, everyone pulling together.”
Those pulling together included school cafeteria staff, preparing hamburgers for firefighters, their building untouched by the blaze.
Gore said the greatest loss, for students, might be the school auditorium. That portion of Williams Township School was never rebuilt.
“They loved that auditorium,” Gore said of her students. “They just had their Christmas programs in there. It was so special.”
Look for more on this story, and additional photos, in next week’s Tabor-Loris Tribune in print and online.