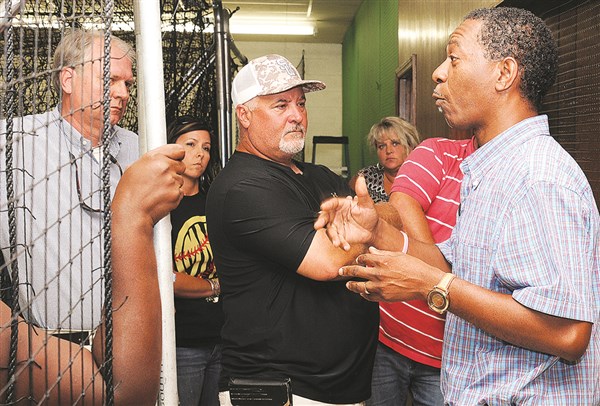 Leaving South Columbus Dixie Youth Baseball behind is likely, but not certain, its president said a day after being confronted by parents, a coach and a sponsor during a meeting of the local Dixie Youth board this week.
“I think I’m through,” Wayne Owens said late Tuesday afternoon. “I’m still debating on it, but I think I’m through.”
Owens, South Columbus Dixie Youth President for eight years, said his critics “wouldn’t give me a chance to answer the questions they were asking,” but declined an opportunity to respond for this story.
“I think I’ll just do what I did at the meeting, keep quiet,” Owens said.
Though Owens did not fully defend himself against allegations of conflict of interest in violation of Dixie Youth Baseball rules and regulations, he wasn’t completely quiet during the nearly 90-minute meeting held inside his business, Line Drive Batting on North Main Street.
Five of the eight local Dixie Youth board members were present, though one, Jeffrey Sumner, listened by telephone as he drove in, arriving about ten minutes before the meeting ended.
Others present were Owens, Lance Barnes, Robbie Wooster, and Danny Barnhill. Not present were Vice President Joe Gore, Travis McPherson, and Robbie Lee.
Clark Grainger, one of Owens’ most vocal critics at Monday’s meeting, said he would be willing to take the volunteer post. Others addressing the board and critical of Owens were Clark’s wife Amy Grainger, Avery and Maria McPherson, and team sponsor Frances Gablehouse.
Coach Ward Stocks expressed concerns, but was less critical; and the town’s contract recreation director, Mike Jackson, defended some criticism of umpires.
See much more on this story in today’s Tabor-Loris Tribune in print and online.