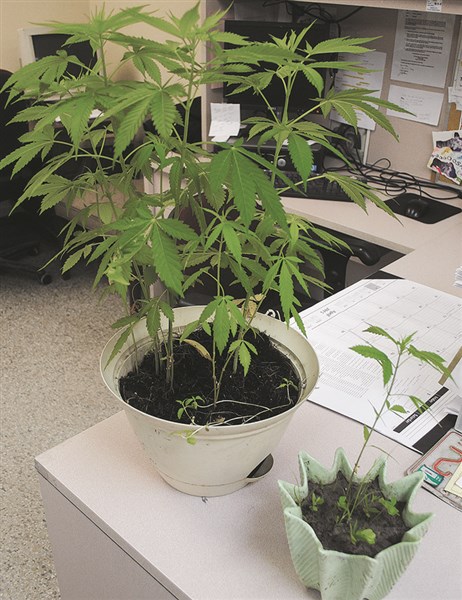 Friday update
Marijuana manufacturing charges were leveled against a Tabor City woman accused in what appeared to be a commercial operation of the illegal weed, Capt. Greg Sibbett of the Tabor City Police Department said Friday.
Linda Harrisson, 54, of 120 School Street, was served with warrants Friday afternoon, charged with possession with intent to sell and deliver marijuana, manufacturing marijuana within 1,000 feet of a school, maintaining a dwelling for the purpose of sale and delivery of the week, and possession of drug paraphernalia, Sibbett said.
Officer Michael Edwards discovered a dozen plants growing in pots on the front porch of Harrisson’s home Wednesday afternoon, Sibbett said. Her home is near Tabor City Middle School.
Plants were at various levels of maturity, and were seized by police, Sibbett said.
Harrisson was processed at the Columbus County Detention Center and released on a $13,500 unsecured bond, Sibbett said.

Wednesday post
Marijuana in what appeared to be a commercial operation was discovered and seized by Tabor City police Wednesday, Capt. Greg Sibbett said. Officer Michael Edwards discovered about 20 plants while on patrol. With an investigation ongoing, Sibbett said he would rather not say where the illegal weed was seized. (TCPD photo)