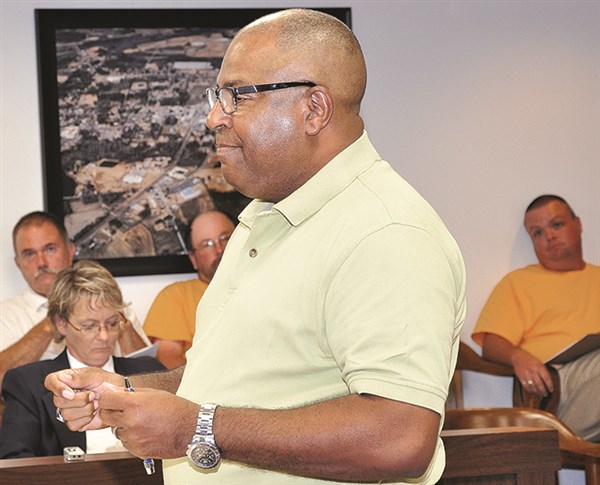 Complaints involving public works and interim director Robert Turner dominated a well-attended meeting of Loris City Council Monday.
Both Pastor Maurice Jones and Kimberly Rudelitch complained about public works issues, one focused on costs, the other on a sinking manhole issue on Red Bluff Road.
Before the meeting ended both alleged hostile behavior by Turner, accusations he did not address.
Jones, on the agenda, said city utility bills were “extremely high” and that he knew of one woman whose water bill was higher than her electric bill.
Jones recommended that council consider allowing Grand Strand Water and Sewer to take over the city’s water and sewer programs, as they have for Marion, Mullins and Nichols.
“It is time,” Jones said. “Our system is more than 100 years old. It’s breaking down, every week, something is breaking down. Grand Stand Water has the means, the system, everything to run the water and sewer system.”
Mayor David Stoudenmire said debt could be an issue, though council will consider Jones’ recommendation. Jones said Grand Strand had purchased public works debt from other municipalities, and hired affected city employees.

Sunken manhole
Rudelitch spoke during the public comment session, and said recent repaving by South Carolina Department of Transportation had left a city manhole cover about two inches below pavement.
Vehicles pulling heavy loads “bang” after hitting the dip, causing vibrations that shake the Rudelitch home, causing nails to separate from the wood and sheet rock walls to crack.
Rudelitch said her husband talked with DOT officials, who said the city was responsible, and that she contacted Turner seeking help. She was joined by neighbors who say they’ve had similar problems, though none spoke to council.
For more on this story see today’s Tabor-Loris Tribune in print and online.