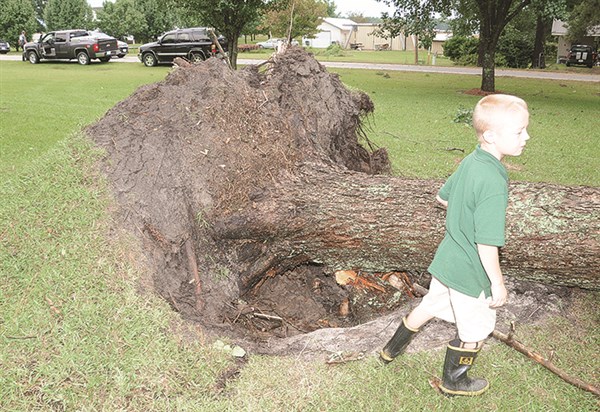 This tree may have been lifted during Wednesday’s storm. (Deuce Niven photo)

High winds, possibly accompanied by a tornado, toppled trees and power lines, ripped limbs loose, and demolished some small buildings including a horse stable in and near Chadbourn Wednesday.
Klondyke/Chadbourn Fire/Rescue Chief Randy Guyton said there were no reported injuries from the 5 p.m. storm, but scattered damage that stretched from the heart of Chadbourn to the Southeastern Industrial Park several miles east of town, kept his crews and some from neighboring departments busy for several hours.
Jason Caines’ home on Peacock Road was the only residence with reported damage, Columbus County Emergency Services Director Kay Worley said. Shingles were ripped from the roof, leaving Caines looking for a tarp as friends and family gathered.
More significant damage was to the south, Jason’s dad Doug Caines said. One barn was demolished, its tin roof wrapped around nearby trees.
Surveying that damage, Worley noted that damage to pine tree tops seemed to show twisting, an indication a tornado may have visited. Barely 50 yards away limbs were ripped from a row of Bradford Pear trees in a straight line pattern.
“That looks like a tornado,” Worley said of the twisted pines before turning towards the Bradford Pears. “That looks like straight line wind.”
Doug Caines said an uprooted tree in his son’s front yard was all the evidence he needed of a tornado.”
“I’m not saying a tornado touched down, but it lifted that tree up,” Doug Caines said. “That tree lifted up, the stump moved back, and the tree fell into the hole. That doesn’t happen with straight line winds.”
National Weather Service officials are expected to make an official determination on the type of storm Chadbourn experienced, probably Thursday, Worley said.
Look for more on this story in next week’s Tabor-Loris Tribune in print and online.