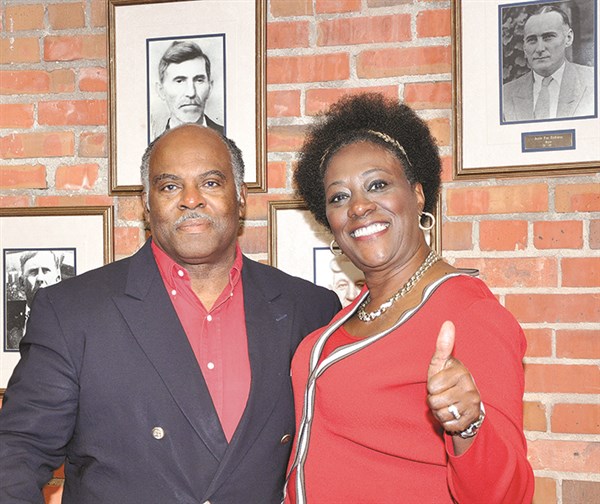 Henry and Veda Nichols celebrate after his election as Mayor of Loris is certified. (Joyce Graham photo)

By a vote of only one, Henry Nichols was declared the winner of the election for Mayor on Thursday morning, after a run off election on Tuesday that was too close to call.
Seven provisional votes told the tale, and proved that everyone’s vote always counts.
Several members of Nichol’s family and friends joined him and his wife, Veda in council chambers. They erupted in cheers and and praise to God when the results were read by Loris Municipal Election Commission Chairperson Peggy Keffer.
Nichols received 247 votes and City Councilman Michael Suggs received 246 votes,” Keiffer said. “Total votes were 496. The city of Loris holds a non-partisan election and to win, a candidate must receive a majority of the votes. Since there was only one seat to fill, the candidate receiving the highest number of votes is declared the winner.
We therefore extend congratulations to Mr. Nichols.”
“I feel real good right now, and I am just happy for the people of Loris,” Henry Nichols said. “They came out and supported me, and I plan to be a Mayor for all of Loris, not just one particular part, but all of Loris so that we can move forward together.”
Veda Nichols indicated that she will be part of the mayor’s team.
“I am going to serve the people of Loris and do an excellent job,” said Veda Nichols. “They deserve the best and that’s what I plan to give them, is my best.”
Suggs, with two years left in his current term as a town council member, was upbeat.
“What can you say?” Suggs said. “You had two great candidates, and you can’t have any better results to reflect that than only one difference.
“We’ll work just fine together.”

Who knew, when?
There were some questions for the Election Commission, as Facebook comments from Wednesday reflected that the results were known to some people yesterday.
“There is no way anyone could have known the results yesterday,” Keffer said. “We didn’t even know yesterday.”
For more on this story see the Dec. 23 Tabor-Loris Tribune in print and online.