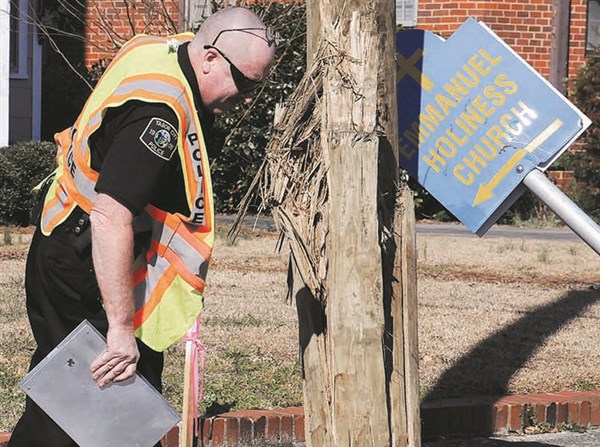 A power pole clipped by a tractor-trailer truck making a turn off of East 5th Street onto Wall Street Monday afternoon closed both roads to traffic.
A Duke Power representative on the scene said replacing the poles would be complete later in the afternoon, possibly about 5 p.m. Crews should be well practiced, they replaced a pole on the same spot Friday morning after another truck making the same turn hit the same pole.
Power was restored after 5 p.m. Monday.
Duke Power is working on a project to move the pole and eliminate the hazard, Tabor City Fire Chief Jerry Hodges said. That project is in the hands of engineers, actual construction still some time away.
Lt. Richard Kosloski of the Tabor City Police Department examined the damage, up close. – Deuce Niven photo