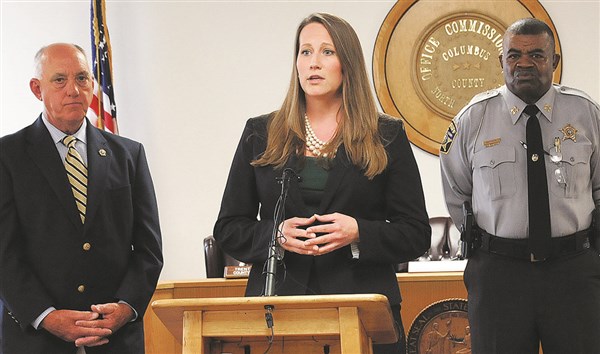 Local launch
Citizen complaints prompted Vice/Narcotics Unit detectives in Columbus County to focused on drug activity centered at the Holiday Motel just north of Whiteville earlier in 2014, Hatcher said. There they came across related activity on Peach Street, located in a mobile home park with a Clarkton address, just across the border of the Bladen County town in Columbus County.
Gang members were bringing heroin, cocaine and prescription opioids into Columbus and Bladen counties, Cooley said. Undercover detectives were making purchases of those drugs, working to build a significant case and to focus on the source of those supplies, when they went to Kannapolis on Dec. 14, 2014, were a large supply of drugs was to be purchased.
Federal agents had only recently joined the case. Hatcher said the U.S. Attorney’s Office agreed to adopt the case, bringing the possibility for much tougher penalties for those convicted of federal drug crimes, Hatcher said.
Cooley said agents intercepted information involving a “hit man” who would be coming to Columbus County to kill a man. Investigators backed off of the drug investigation, Cooley said, “because of the great violence these individuals were perpetrating.”
Several Piru Mob members, including Schenck, who had made the trip to Kannapolis were taken into custody during a traffic stop as they returned to Columbus County.
Four men were directly charged in the shooting that left one man, who survived, injured, Cooley said. They were McLean, Quinn, Chidress and Williams.
Gangs are present, but not prevalent in Columbus and Bladen counties, the two sheriff’s said. The same is true for gang violence, and gang related shootings appear to have been reduced in the 17 months since the first Piru Mob arrests, Hatcher said.
“I would hate to think what would have happened if we had not stopped this when we did,” Hatcher said.

Piru Mob
Piru Mob was described as “a set of the United Blood Nation operating in Columbus and Bladen Counties,” the news release said, and “had a large distribution operation, supplying heroin, cocaine, and prescription opioids in the Clarkton, North Carolina area.
“This drug distribution was often accompanied by violent shootings and two retaliatory acts against rival gang members.
Schenck and McLean “ordered multiple hits on individuals who affected their drug distribution operation. These orders resulted in the shooting of at least one individual and the attempted shooting of several others.”
Gang members were arrested after making a drug run to Kannapolis as investigators discovered plans to bring back a gang enforcer “to finish a hit on a local rival.”
“This type of gang violence is intolerable,” said Acting U.S. Attorney John Stuart Bruce. “The United States Attorney’s Office is committed to dismantling drug trafficking organizations such as this one, and ensuring that their members cannot perpetrate violent acts that jeopardize the safety of our communities.”
Agencies assisting the Columbus County Sheriff’s Office in the investigation included the Bladen County Sheriff’s Office; the Bureau of Alcohol, Tobacco, Firearms, and Explosives; the Federal Bureau of Investigation; and the United States Attorney’s Office.
Columbus County Sheriff Lewis Hatcher said he was grateful for the assistance, adding that “Gang violence will not be tolerated in Columbus County.”
“This is a perfect example of when multiple agencies work together to combat the gang and drug problems in our two counties,” Bladen County Sheriff Jim McVicker said. “I would like to extend my greatest appreciation to the Federal Bureau of Investigation; the Bureau of Alcohol, Tobacco, Firearms, and Explosives; and the Columbus County Sheriff’s Office.”