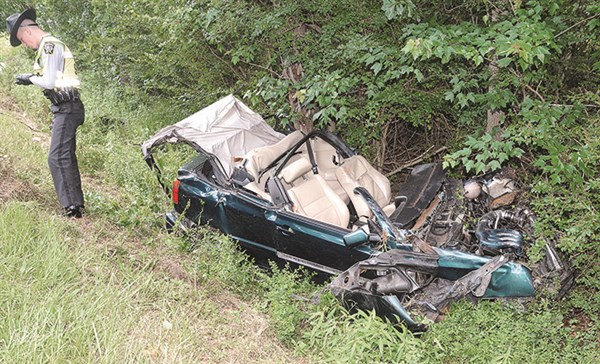 A Columbus County woman died after being thrown from her small convertible car as it tumbled through a ditch east of Tabor City Saturday afternoon, Columbus County Coroner Linwood Cartrette said.
Sierra Patricia Neese, 20, of Blackwell Road in Cerro Gordo, died in the single-car crash on Reynolds Road, near Peacock Road, before 4:30 p.m. Saturday, Cartrette said.
Neese appeared to lose control of her car in a curve, striking a ditch on the left side of the two-lane highway approaching Peacock Road, Cartrette said. She did not appear to be wearing a seat belt, and was thrown from the car as it soared into trees along the ditch bank, landing on its wheels more than 50 feet away from where the woman came to rest.
Debris from the car, including its battery, littered the roadway beyond the car.
Neese was known to some in Tabor City for her work as a waitress at Mama’s Restaurant, a downtown breakfast restaurant. Her obituary may be found here.
A gofundme.com account has been established to help the family with the unexpected funeral expenses. It may be found here.
For more on this story see Wednesday’s Tabor-Loris Tribune in print and online..